Tom Six wins. His new film, the final entry in a franchise that would be schlocky were it actually tolerable, is one of the worst films there has ever been. The Dutch enfant terrible – inasmuch as he’s infantile and, you know, terrible – has succeeded in provoking a negative reaction from an audience member, much as he set out to do. However, I’m not sure it was exactly the type of ‘negative’ he was after. Final Sequence is not gross-out horror. It isn’t satirical. It isn’t offensive (at least, not in the way that he thinks it is). In fact, it isn’t even any of the things Six said it would be as he tried to excuse himself ahead of the inevitably disastrous reviews. The man is an incompetent fraud; please, nobody else give him any more money.

I haven’t seen The Human Centipede II (Full Sequence) (2011), because I was lucky enough to have been prior warned about the scene in which a baby’s head is crushed immediately after birth. (What the fuck). Alas, I can’t attest to its execution, but the story at least had potential: some loser (Laurence R. Harvey) is pathologically obsessed with the first Human Centipede film (2009) to the point where he sets out to create his own version of its eponymous gastronomical abomination. This apparently worked so well that Six decided to use nearly the exact same premise for the second sequel. Here, a prison warden (Dieter Laser from the first movie, inexplicably) and his accountant (Harvey, again) watch the first two Human Centipede films, and recreate the idea as a punishment for the convicted as well as a deterrent for would-be offenders. 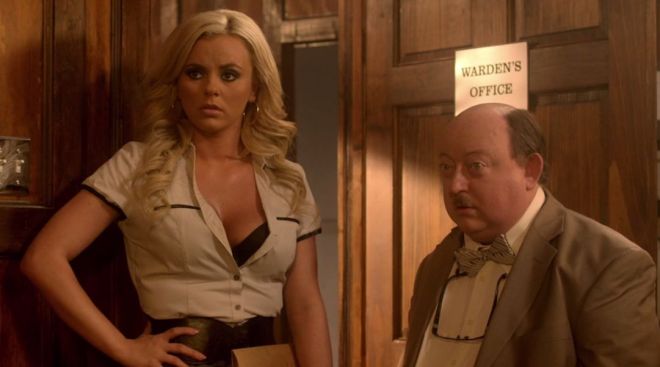 So despite the fact that sewing arses to mouths was a punishment Six originally thought up for child molesters, he’s now using that same idea as a way of lampooning the way America treats its criminals. And I use the word ‘lampoon’ very loosely, because whatever argument Six is supposed to be making is completely lost on me. The level of insight he provides here suggests that his idea of prison is entirely based upon jokes from Family Guy, and the level of enjoyability suggests he doesn’t even know what fun is supposed to look like. That’s two strikes, three if you count the inherent stupidity, which means Final Sequence lacks some of the very basic components of a good movie: entertainment value, sensitivity, or cleverness. It’s not even an interesting failure at that.

If you’re getting the impression that Final Sequence has nothing going for it, that’s still not the full picture. Dieter Laser becomes the movie’s biggest single problem by playing dickhead warden Bill Boss, a guy who manages to be sociopathic as well as cripplingly insecure, whose greatest fear is getting raped, but who habitually molests his secretary (Bree Olsen) anyway. Laser didn’t even have to try to make this guy despicable, but what he does is make the character so unbearable to watch that, on more than a few occasions, I felt physically revolted. He tries for humour by overdoing absolutely everything, only he overdoes it to the point where his performance starts to earn a special place in Hell. I would venture that it’s the worst performance I’ve ever seen, as it often feels as though his ketamine-ailed foghorn yelling is solely to blame for making the movie so dreadful. As it transpires, it only seems that way because he dominates the screen for so long; whenever something else happens, it redeems him of that responsibility. For instance: if his co-star Laurence R. Harvey had to put on an accent to save his life, he would die.

Lo and behold, Tom Six eventually shows up, playing himself. Again, he squanders any and all potential for meta comedy, this time by having all the other characters list off reasons why The Human Centipede is a cornerstone of popular culture. It’s reasonable for him to believe that, because it did have a habit of cropping up in conversation (about six years ago). But I’ve never heard of anyone actually liking the films, and this is because they are simply unworthy of viable praise. At certain points in Final Sequence, Six can’t even follow the basic rules of continuity. There’s no sense of tone, and all the time that it could have used to generate tension or laughs, it instead spends on inexcusable moments like the two minutes dedicated to Laser having a gross orgasm. He fails to make the movie a satire, mainly because barely any of the characters could even qualify as a caricatures; the only one with any basis in reality is himself, and he’s the guy who makes money off a franchise in which human beings are forced to feast upon other peoples’ shit. 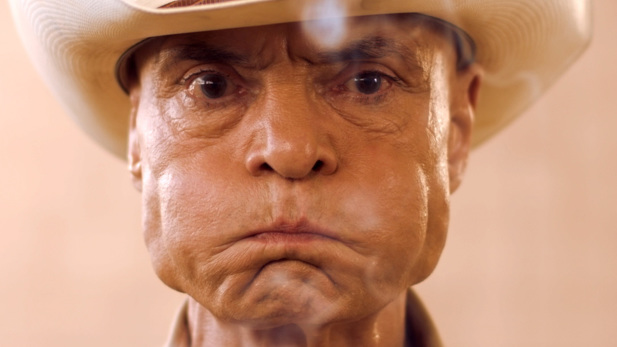 The most grating thing about this odious 102-minute ordeal is that the writer-director seems so incredibly pleased with himself. The movie begins with a ‘warning’, which reads: “This film contains extremely graphic violence and sex. For mature audiences only”. As if there were any need to say such a thing at the start of the third movie in a well-known franchise called ‘The Human Centipede‘, even this is fundamentally wrong, because it isn’t for mature audiences in the slightest.

Worst of all, the movie fails at the one thing it was actually supposed to do: shock. There’s a moment in which an anus is being sewn in preparation for connection with a mouth, and another where a man is castrated; other than that, if you’ve seen something like Kill Bill, you’ve seen about as much as this film has to offer. We know what human centipedes look like, especially this one which is all over the promo materials, so there aren’t even any surprises there. If all you’re going on is the tagline – Six’s last-ditch attempt at making some sort of impact in the world – then I’ll leave you with this quote from Laser, the main speaker in a film that is, apparently, “100% politically incorrect”:

Fuck! Fuck! Fuck you! Fuck yourself! You imbecile, communist, zombie cunt. Nobody insults me like that. I’ll stuff your baggy homosexual shithole with Cuban cigars up to your throat! Don’t mess with Bill Boss!