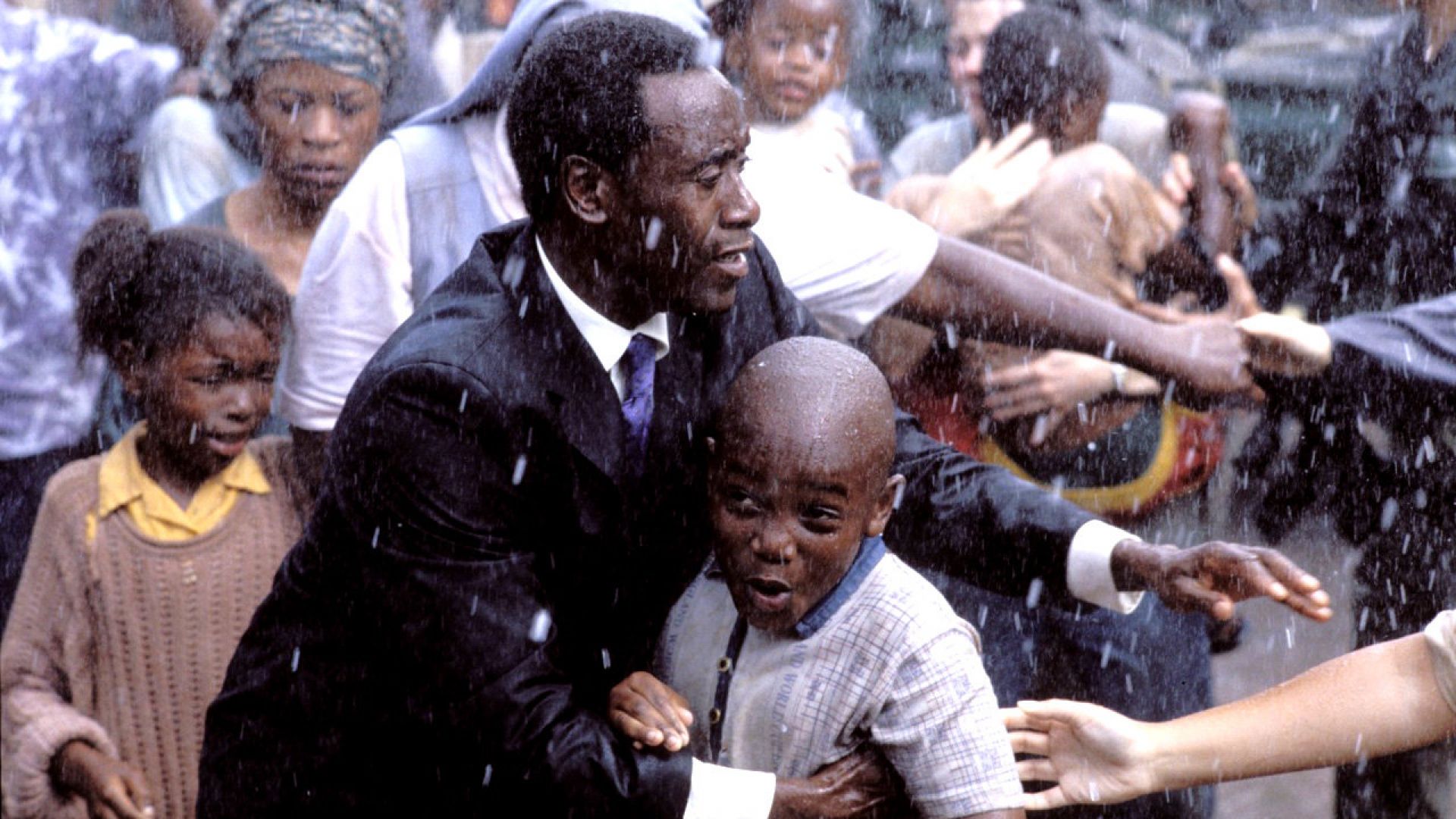 The sentimental influence of Hollywood blunts the sharp blade of an African holocaust.

Hotel Rwanda (2004) concerns the Rwandan genocide that had occurred a decade previous – a mass slaughter of Tutsi people, on the grounds of ethnicity, that began within a few hours of reigning President Habyarimana’s assassination. Catalysed by the existing conflict from the Rwandan Civil War, and exacerbated by a prepared political elite known as akazu; what resulted was an eruption of terror and intense violence that snatched the lives of an estimated one million Rwandan souls in the period of around one hundred days.

This key historical drama is based on real life events that transpired only twenty years ago – a modern day holocaust that went unreported in much of the western world. The fact that both US and UK governments were aware of this unparalleled modern massacre at the time of its occurrence, and chose not to act, is something I find both shocking and disgusting.

Terry George directs powerfully as he captures this important piece of history by telling the true story of a compassionate and heroic family-man named Paul Rusesabagina, portrayed by Don Cheadle. This is a man who, when fronted with horror and surrounded by darkness, led his family and over a thousand refugees to safety by granting them shelter in the besieged Hôtel des Mille Collines. The film succeeds by enthralling its audience throughout whilst elucidating this atrocious example of man-made evil; the story also packs an emotional punch by engaging focus through the protagonist on his commendable mission of against-all-odds bravery. In terms of acting calibre, Don Cheadle gives an outstanding performance owning his role as the relentless, desperate and loving father who will stop at nothing to protect him family. Similarly, Sophie Okonedo assists in conveying the overwhelming fear and desperation which surrounds this bleak account of history.

However, one of my major quarrels with this film is with the plot. After researching the genocide and the reaction of various Western politicians; it seemed like George could have handled the information more accurately and shone more of a revealing light on the apathetic governments that initially contributed to the problem. There is no doubt this film is beautifully crafted, it just feels like there has been a compromise of reality for the benefit of reception. This hindrance of validity exists to make room for a more likeable and commercial Hollywood movie; an element mirrored in the film’s conclusion. And whilst this is understandable, with the majority of audiences enjoying a sense of resolve and catharsis at the end of an episode of pain, it simply was not the case. Our protagonist reached his own moment of resolution in the closing scenes, but through a wider scope it was far from a happy ending.

Hotel Rwanda is an important and informative piece, for all of its 121 minutes we find ourselves on a ride of uncomfortable empathy. We endure countless scenes of violence, brutality and murder as the Rwandan landscape, once plump with life, becomes littered with the bodies of innocent men, women and children. You become attached to the emotion which runs through this film’s veins and can’t help but sympathize with the reality of the aftermath – all those innocent lives cut short, children left fatherless and mothers left without children. It is an important story that needed to be told.

The film explores various themes including genocide, political corruption, rebellion and the effect of obedience and political apathy whilst providing insight and perspective into a horrific act of evil that enveloped a country. As its population pleaded for help, Western governments took an apathetic view as if to say – not our problem.

“I think if people see this footage, they’ll say Oh, my God, that’s horrible. And then they’ll go on eating their dinners.” This blunt yet accurate line, delivered by Joaquin Phoenix’s character, describes succinctly the political immorality surrounding this time of helplessness for the Tutsi people.This kind of blindness is unacceptable and completely unjust in today’s world. We can only hope that this poignant, thought-provoking historical drama can encourage audiences and future generations to understand the futility of war, the repercussions of violence and the lessons in our history… as summarized in the famous quote: “those who cannot learn from history are doomed to repeat it”.