The best Terminator film since 1991 (even though that’s not saying much!)

In the months leading up to the release of Terminator: Genisys – seemingly just another unnecessary fuck-up of the already chaotic timeline in this otherwise influential science-fiction franchise – the leaked trailers, the intentional (but as it turns out justified) misspelling of ‘genesis’, the video of Arnie tapping a cup of tea with a spoon to the distinguishable plodding Terminator theme, amongst other unpromising signifiers led me to believe that this fourth sequel would receive at least a bronze medal at 2015’s Dogshit Film Olympics (that is, behind the interminably hideous United Passions, that has surely secured its faecal-encrusted gold). Unsurprisingly then, the release of Genisys received an avalanche of negativity. Going in to witness this supposed monstrosity on the big screen, my expectations were about as low as James Cameron when he plunged to the nadir of the Mariana Trench back in 2012.

Genisys begins in 2029 with John Connor (Jason Clarke) leading the human resistance to a final, massive offensive to destroy Skynet – an artificial intelligence system that has long-since decided that it is better off without the human race that pioneered it. In a last-ditch effort to eradicate humanity, Skynet sends a Terminator back to 1984 in order to ‘terminate’ John’s mother, Sarah (Emilia Clarke), a presumed waitress in L.A. In order to counter this, Resistance fighter Kyle Reese (Courtney) volunteers to follow the Terminator back in time to protect Sarah Connor. Sounds pretty familiar so far, right? I actually enjoyed this opening a lot, surprisingly so. The frantic pace of it, the whole future-end aspect of the time-travel business and what was essentially the recreation of the opening moments of the original Terminator film. More-or-less, it worked and there seemed to be no time for respite with the proceedings. 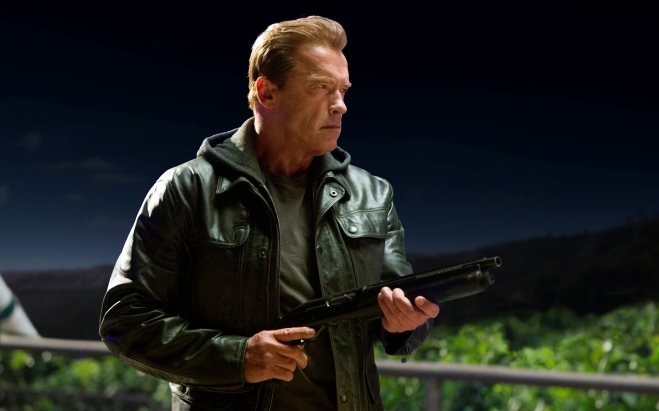 Soon enough, Genisys does cease with the recreation of the original and does eventually become its own film. As it turns out, due to a ‘nexus’ (an alternate past?), this 1984 is not the same 1984 as was seen in the original. Sarah Connor is already clued-up and preparing for the imminent Skynet war with ‘Pops’ (Schwarzenegger, “Old, but not obsolete”), another protective Terminator who was sent back even more previously to protect her and who is less machine-like thanks to years of human interaction.

Taking the franchise into the iPhone generation, this timeline has it that Skynet is launched in 2017 via a popular operating system called Genisys: an operating sys-stem that has taken the world by storm. In itself, this touched upon a relevant topic. If something along the lines of Skynet actually happened (stay with me), with humanity in the 21st century being so over-reliant on technology and WiFi connection, it is safe to say that we would be screwed beyond belief. The topic of humanity’s relationship with technology has been dealt with a lot better in countless other films but it got me thinking nonetheless. I only wish this concept had been explored with a little more depth rather than cropping up before appearing as an afterthought.

In the brilliantly original and wonderfully perplexing 2012 science-fiction hit Looper, Jeff Daniel’s character declared that time-travel “fries your brain like an egg”. If you give the concept too much thought in the context of Terminator: Genisys, then it practically douses your brain in molten metal, perhaps deliberately so in a self-deprecating capacity. There are multiple inconsistencies and gargantuan plot-holes that traverse the entire franchise. I.e. just before Reese is sent back through time he witnesses John being attacked by an assailant which creates new memories and essentially triggers the main narrative strand of Genisys. But this implies that Reese in the 1984 original (Michael Biehn) simply forgot all about it. Also, I would like to have thought that Miles Dyson’s son would have given carrying on his father’s work of developing Skynet a second thought after his father was ultimately killed because of it. A comment on nepotism, perhaps? There is also a strange scene that occurs about half way through: Kyle and Sarah are undressing so they can go back in time, the film has already addressed the awkward sexual tension between them beforehand and Kyle can’t help give Sarah’s naked silhouetted physique that is shown on the wall a good look. So why, then, would you use this occasion to talk about your child. He may be the future-leader of human resistance but this still seems a bit odd to me.

The film also seems to lack the grand sense of spectacle that is typical of the franchise. The Terminator (1984) and Judgement Day (1991) were chock full of helicopter and truck chases, cyborg battles and cool Shotgun-spin loading. Salvation (2009) even had the cool sequence with the Harvester (but that’s it). Despite scarcely and surprisingly finding Genisys to be full-on boring, the most memorable action sequences that I can recall is one involving an MRI machine as well as the well-executed (and, to my knowledge, largely CGI-free) bus chase during the climax. But that’s really it. It is true, and rather unfortunate, that most of the time seems to be spent on the characters discussing the perplexities of the plot and Arnie spouting his roster of contractually-obliged, winking, one-liners for the trailer. But you know what, if my attention is maintained, then the film must be doing something right somehow (or I’m just easily entertained). 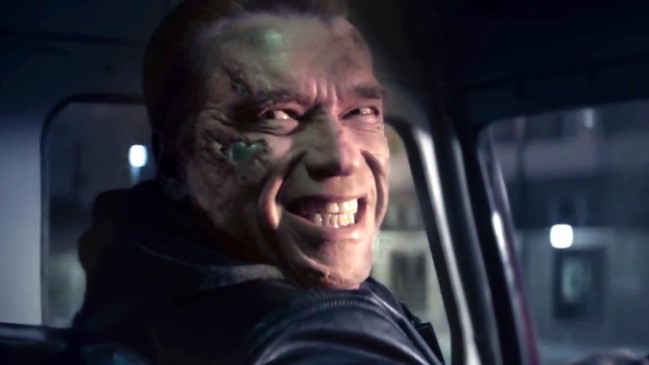 One aspect of the film that has been subject to considerable criticism (SPOILER!), is it’s villain-making out of John Connor – the guy who had three films that were essentially about keeping him alive. Some may say it’s a bold move, others may say it’s foolishly dumb. My two-pennies worth is that Connor essentially fell victim to Skynet meaning he didn’t really become a villain, per se. It’s a controversial decision (to say the least) but one that I could accept and even admire for it showed the filmmakers willingness to take the franchise in another direction instead of having the narrative perennially chasing its own tail.

As confusing as the plot may be to some, as largely unremarkable as the cast may be and as little screen time as certain characters get – specifically J.K. Simmons’ conspiracy-spouting senior detective who witnessed Reese’s temporal arrival back in ’84 and Lee Byung-hun’s steely T-1000 – I did truthfully enjoy Genisys a lot more than I was expecting. It may simply be because of how god-awful I was assuming the film would be for so long given how much I love the first two films. I may look back at this review in a few years (when the dust of the apocalypse has settled maybe) and weep at how wrong I was. But for the time-being, Genisys gets my recommendation, albeit a marginal one.